Linda Kinstler: I saw that the last meeting you had before the war was about the creation of a museum on the Russian war against Ukraine in the kyiv fortress. Tell me everything that’s happened since.

Yana Barinova: We woke up at 5 am, probably on the 24th. My upper management was calling, saying to urgently bring all department managers to our place of work. There was an alert in the city that there was a threat. I live alone with my daughter who is 13 years old. We packed two suitcases and she came with me to work. I cannot describe the state in which you arrive at work with your child and two suitcases. We received instructions on the evacuation of documents and cultural artifacts, and each department went to implement its own plans. We called an urgent meeting with our department heads, what to do with the personnel files, what to do with the rubber stamps, what to do with the secret documents, where is the safe? We didn’t believe, until the end, that we would ever need to implement these plans for real.

Then, on a special line, I received a call saying that we all had to leave the building. My daughter was in my office all the time, she saw everything, how her mother ran meetings and how we put documents together. It was the first day when the first rocket fell, February 23 or 24, the first day of the war.

After that, I returned home. The next day and a half there were constant air raids. Alerts, alerts, alerts. During the day, we ran five or seven times to the air-raid shelter. When the first missile fell, it was probably on the 25th. It happened not far from where I live. I understood that we had to get away from kyiv, that it was no longer safe, that they were encircling the city. My daughter and I got in the car at 6am and drove south where my mother lives. It was like in a horror movie. As we left kyiv, tanks drove in, there were rocket launchers on the highway, diplomats came out in cars with diplomatic license plates. There was no gasoline at the service stations. Everywhere there were soldiers on the road.

We arrived at my mother’s house. We were happy to at least be together. And that’s when the shelling of the port of Odessan began. My parents live near the port. I took a video from the balcony, how they were bombarding it. I understood that I could not stay there. So we decided to go to Odessan Oblast, to a house with a generator and a concrete basement. We spent two and a half days there, three days, until a rocket fell on the village ten minutes away. After that, I couldn’t hold it back anymore. We read that the Chechen army was approaching, that Wagnerian militias from Africa were arriving, that they were looking to hire soldiers in Syria to bring them to Ukraine. I decided that I had to take my daughter out. And that’s where the shortages start, the food shortages. . .

My sister lives in Vienna. We went from Odessa to Moldova to Romania to Hungary to Vienna. We waited thirteen hours in the car at the border between Moldova and Romania, where there is a ferry. Thousands of people were there. It was snowing, the babies were swaddled in blankets and sheets. It was a nightmare. Now the situation is getting worse. People just leave their things behind, abandon their cars at the border. The Russians are even firing on the humanitarian corridors. Basically, within a week, we were on the run. We fled from kyiv to Odessa, from Odessa to the Odessa region. From there to somewhere on the border with Europe. We didn’t sleep for three days and three nights.

My mother didn’t want to come with me. Finally, I persuaded her. She suffers from migraines, she had a migraine attack, it was terrible.

Now I am in Vienna. I follow the events, but I think I have to go back. I’m organizing an effort to show films in the metro for people who are housed. We have an agreement with the GosKino Fund [the State Film company]. We found projectors and speakers because there are thousands of people at each station.

We evacuated all valuables from the museum to the basements. We took them off the walls. We have very valuable cultural artifacts, such as Aivazovski’s paintings. So I continue to work. I just helped evacuate the famous Ukrainian composer Valentyn Silvestrov from kyiv. Every day, my colleagues are less and less in touch. Many of them have left kyiv, many of their phones are off. Many of them live in areas of kyiv – Bucha or Kostomel – where many of the fiercest battles take place. So every day we just check our chats, “Hello, who’s online?” And a lot of people aren’t online. Our department is therefore paralyzed. It’s like that. They started shooting at peaceful civilians. It’s very scary.

LK: Tell me about that last meeting you held in kyiv, on the creation of a museum on the Russian-Ukrainian war. What kind of museum did you want it to become?

YB: We wanted to make a museum about the war that started in 2014, which would illustrate everything that happened in the east, the annexation of Crimea and the Russian aggression. Show the chronology of events, tell the story of the resistance that Ukraine has demonstrated. We wanted to create a new peacebuilding institution, one that would talk about an ongoing war, not a past war, not WWII, but what is happening here and now, in real time. Provide psychological and legal assistance. To have a place where people can reflect on what has happened to our country over the past eight years. This meeting was on the 17th. And then on the 24th, the first missiles fell.

LK: What do you think of this meeting now?

YB: (Sighing) The meeting was prophetic. It is difficult to answer this question. You know. I was very afraid for my life. I am a public figure and an official who spoke publicly about the construction of a museum on the Russian war against Ukraine, I expressed Ukrainian patriotic feelings. I am a big believer in Ukraine and its victory. But I also understand that if we lose, I can never go back to Ukraine. In Russia, they throw you in jail for posting on Facebook. 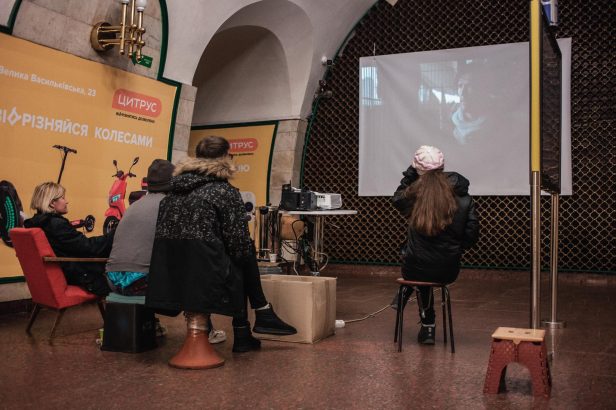 LK: How did you save Ukrainian cultural artifacts?

YB: First of all, information on cultural property is secret. They are safe. Everything we could do, we did. We provided armed security for the museums. The Minister of Culture called a special operational Zoom conference and issued instructions to all culture departments across the country. As much as we could, we secured everything. Regarding the evacuation of animals, it is not planned for the moment. The animals are still in the park, and the director practically lives there, trying to control the situation. During the shelling, the elephant almost lost its head. The animals are monitored and given care so that the sirens that go off every ten minutes do not break their hearts. A lot of directors spend nights in museums, they don’t come out, they sleep in basements and wear bulletproof vests in their parks.

It turns out that all of our directors are very dedicated, the directors of all of our agencies, museums and theatres. Until the last minute, they thought almost more of the artifacts in their museum than of their family. It is very impressive, their heroism and their pain for our country.

LK: Who is left in Kyiv? How do you still manage to organize cultural events in the field?

YB: Everyone is in the bomb shelters. They cannot move without permission. People can’t go out on the street. Many have made their resources available online – history, art, philosophy lessons – so people can somehow stick together. But cellular connections go down, internet connections go down, and in many bomb shelters there is no connection. What we have been able to organize is to show films in the subways. This is our big project. The Ministry of Culture is actively reaching out to UNESCO [and other organizations] because it was said that they were threatening to send a missile into Saint Sophia’s Cathedral. We try to maximize diplomatic openness, to try to ask the international community to support us. But culture is soft power. We can’t do anything more than try to preserve what we have and tell people what’s going on.