STateline, Idaho, is a spot on the travel radar, with fewer than 40 residents, numerous gas stations and several entertainment venues – a strip club, a biker bar, a country and western dance hall and a racetrack – contributing to the frontier town’s rowdy reputation . This is the last place you would expect to see a restaurant serving French-inspired crepes and authentic Bulgarian cuisine, but that’s what you’ll find at the Border Stop.

“Everyone is really nice and happy that there is different cuisine in the area,” says Dimitar Gerov, who opened Border Stop this spring with his wife Heather Gerova.

Bulgarian gastronomy is different, but part of the Balkan region, it is also familiar. Bulgaria’s eastern flank sits on the Black Sea, with Turkey, Greece and North Macedonia to the south, so some of the flavors on the Border Stop menu are reminiscent of Mediterranean cuisine. However, Serbia and Romania lie to the west and north of Bulgaria respectively, lending Slavic elements to the cuisine as well.

The princess ($8-$12), for example, is one of many open-faced baked sandwiches that might appear on a typical Bulgarian breakfast menu or on a street vendor’s cart. The classic ($12) includes seasoned pork, beef and onion, with sharp white cheddar cheese, while the Balkan ($11) includes salami, sharp white cheddar, Bulgarian seasoning and lutenitsaa thick condiment of tomatoes and roasted red peppers.

“Lutenitsa will be different in different regions and households, with each family having their own recipe that they pass down from generation to generation,” says Gerov.

The red peppers he is used to are called piperka and have sweet and nutty notes similar to a Spanish piquillobut with more heat.

Gerov regularly imports ingredients to capture the authenticity of the Bulgarian cuisine he grew up with. For example, he brings organic Bulgarian feta cheese made “old school” and features it on the garlic bread ($7), in the Shopska salad ($10.50) with cucumber, kalamata olives, tomatoes and peppers, and Banitsaa cheese-filled savory pie only available from the sampler plate ($13).

Banitsa, which is in Bulgarian, combines puff pastry phyllo, Bulgarian yogurt, eggs and feta cheese, says Gerova. It’s so laborious that she makes it much smaller than how it would traditionally be served, pairing it on the sampler plate with garlic bread, lutenitsa and sarmathe Bulgarian answer to Greek dolmades or stuffed vine leaves.

JThe border stop is located above the A1 Smoke Shop in a space the previous owners used as a cigar shop and wine bar.

Despite the unusual location, the interior of the restaurant is cozy and inviting. A half wall in the main dining room and bar overlooks the smoking room below, but it’s not intrusive. Black ceilings, resin-covered tables with a swirling design, dim lighting, faux plants, and jazz from a speaker create a soothing ambiance. There’s a TV behind the bar but instead of the cacophony of sporting events, it shows wonderful mountain scenes on a continuous loop.

Look for rotating local brews, Gerov says, and the “sometimes skunky Pilsner of Europe,” as well as other German beers ahead of Oktoberfest. The wine list is modest – a few from France and New Zealand – with more bottles added slowly.

Outside, the Border Stop includes a patio and occasional live music.

The restaurant’s Facebook page is a good place to check for events and the latest culinary specials like kebapche or grilled Bulgarian skewers ($10.50) or terratora cold soup with Bulgarian yogurt, cucumber and dill ($5). 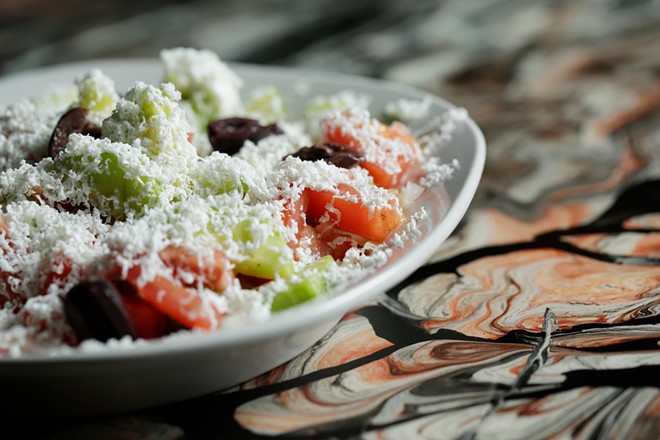 Gerova does much of the cooking at Border Stop, having learned from the source: Dimitar’s mother and his grandmother, or baba. Nobody writes anything, says Gerova, so she filmed the Gerov matriarchy in their kitchen.

The couple, who moved to Liberty Lake in 2019, tried but didn’t quite master baba’s recipe for Bulgarian yogurt, Gerov says. Although it resembles Greek yogurt, it is spicier, he adds, and Bulgarians serve it with everything.

“Yogurt is an important part of Bulgarian culture, as you can imagine with its history,” he adds.

Fun fact: Bulgarian scientist Stamen Grigorov is credited with the discovery of lactobacillus bulgaricusthe bacteria that naturally and magically transforms milk into yogurt.

Baba may be the source of most of the recipes on Border Stop’s menu, but Dimitar’s mother is the inspiration for the pancakes.

“For pancakes, we use mom’s recipe,” says Gerov. It’s a family secret and includes “a little of this and a little of that,” he says.

The Border Stop serves nearly two dozen sweet and savory pancakes. Some are familiar combinations like the Cubano ($12) with Swiss cheese, ham and dill pickles, the chicken shawarma ($14) with ground chicken with Middle Eastern spices or the Almost Elvis ($11 $) with banana, peanut butter and honey. Others reflect more unusual ingredients like homemade cream and oreo cookie crepe ($12).